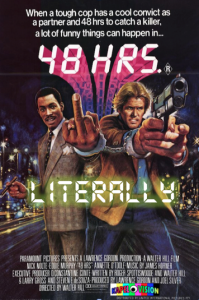 Kapelovision™ is proud to announce its upcoming film project: “48 Hrs. Literally,” a film based on the 1982 Eddie Murphy/Nick Nolte action comedy which, when finished, will literally have a running time of 48 hours.

Here is the first installment of the “48 Hrs. Literally.” This segment is roughly 1/288th of the completed 48-hour film.